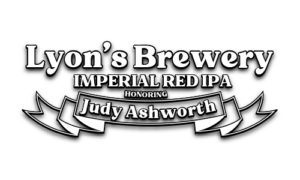 Judy Ashworth, “The Grand Dame of Publicans,” acquired the Lyons Brewery (actually a pub) in the East Bay in 1983. Shortly after, she switched over the taps from macro to micro-brewed beers and European ales. Judy helped to elevate craft beer early on by embracing and promoting it at her pub, bringing about greater awareness and knowledge to her patrons. Although long retired, Judy can still be seen judging beer competitions, frequenting beer events, and socializing in her garage pub she calls “The Oasis.” Sweet caramel malt with a touch of rye lays a foundation for Citra®, Mosaic® and Centennial® hops to shine in this Imperial Red IPA.

PLEASE NOTE: Currently not shipping beer direct. Please visit the beer finder for a Revision vendor near you Dismiss